Back to the Orienteering Grind

This weekend was my first time orienteering this season with two back to back training sessions on Saturday and Sunday.  Saturday was a slow, sloppy, and sluggish Middle distance training at Elbow Bluffs near Bragg Creek, AB just outside of Calgary. Patrick Goeres and I ran the 2007 team trials Middle distance course. Very vague in places, made some mistakes but also had some good legs. Took it really easy and didn't push at all. Just tried to use the compass and try to read as much as I could.  It was tough/slow going through some deep snow in places. Flags would have made it much easier and nicer.
Sunday Patrick and I went out to Bow Valley map to run the 2011 M 17-20 Barebones Long distance course up to #14 only missed the last 3 controls because we wanted to keep it around 60 minutes. Patrick started and we alternated leading each control which made it easier when deciding where the control should be. Hooked some controls but also had some solid ones too, felt way better than yesterday since I was back into the right mindset for orienteering. Amazing map and terrain for some top notch orienteering training. There was some knee high snow drifts in places but not much snow at all. I think almost all the orienteering cobwebs are gone now, I hope. Here are the two training maps. 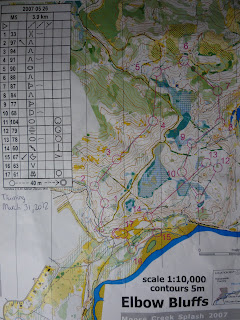 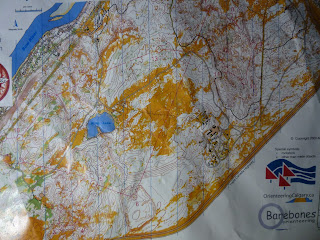 Train on,
Damian﻿
Posted by Damian Konotopetz at 21:26