This past weekend was the second set of races in order to qualify for the WOC team. Barebones was held in Canmore with the sprint and long distance races on the intricate ski trails at the Canmore Nordic Centre and the middle distance on the Mt. Laurie map that has some very complex areas. Simply was not a good weekend for me. The first race was the sprint on Saturday which was going very well but blew a control and was out of the race. Unfortunately I ran into a tree on a trail, I glanced down at the map and the trail turned and I hit the tree at full speed, scrapped up my leg, hand and shoulder. The long was the same day in the afternoon, I decided to run in despite being pretty sore from the sprint and my foot contusion was acting up again which made running painful. Didn't have a great race, too many small mistakes throughout the course and a lot of climb on a sore body didn't help my situation either. The middle on Sunday was tricky and I made a few bad mistakes early, combined with being injured was not fun so I decided to take a DNF which made the end to the weekend even more frustrating.  This spring I have done the most orienteering ever prior to the major spring races and have had some of my worst races ever which is very frustrating. Being injured and not feeling 100% probably has affected my results but regardless it is very annoying and I know I can't do anything about it. The WOC team will be announced June 3rd. 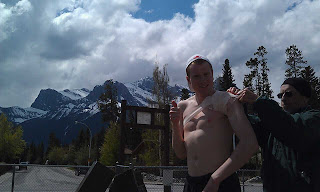