After improving tremendously in the 2013 season, 2014 is looking promising. I have decided to focus on running this winter with hopes of developing my orienteering further. After many seasons of short track speed skating in the winter months I am now running track for the U of C Dinos which will hopefully show in my fitness at the start of the 2014 orienteering season in the spring. 2013 was filled with many ups and downs, from missing out of the World Champs which led to more valuable training and racing experiences in Europe, winning two medals at the Canadian Orienteering Championships and taking the Canada Cup Elite Series title after suffering a knee injury in Europe that disrupted my training for over two months, to being featured on the Cover of orienteering North America Magazine which was an unforeseen bonus to cap off a great season.

I put on the U of C Dinos singlet for the first time in December for a season opening 3000m race in Calgary. I managed to unexpectedly beat some of my team mates placing 3rd in a time of 9:46 (9:38 if you take into account the altitude). Apparently the track where the race was held is slow since the corners are not banked and I was told if I ran the same race somewhere else I would have been in the 9:20s. Hopefully I can run under 9:20 by February. I will be racing the 1500m in Calgary on January 4th which will be something new and most likely painful J.

The upcoming season looks exciting with many races I am looking forward to. To name just a few; Canadian Team Selection in Italy, WOC?, SOW, WUOC and NAOC. My main goals for 2014 will be to defend my Canada Cup Elite Series title, make the WOC team for the sprint, middle and relay, place in the top 10 in the WUOC sprint and have a strong race in the middle, win the sprint and middle and top three in the long at NAOC. Hopefully I can stay healthy and am able to give myself a chance at accomplishing my goals. I can't wait to get out and do some winter "O" training in the new year. Bring on 2014! 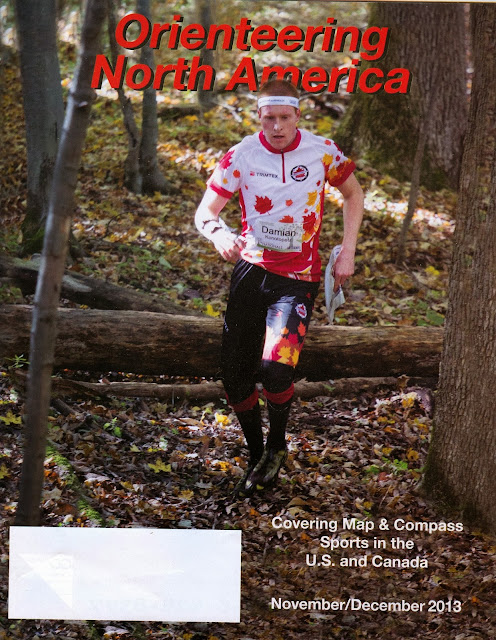 Train on,
Damian
Posted by Damian Konotopetz at 20:40